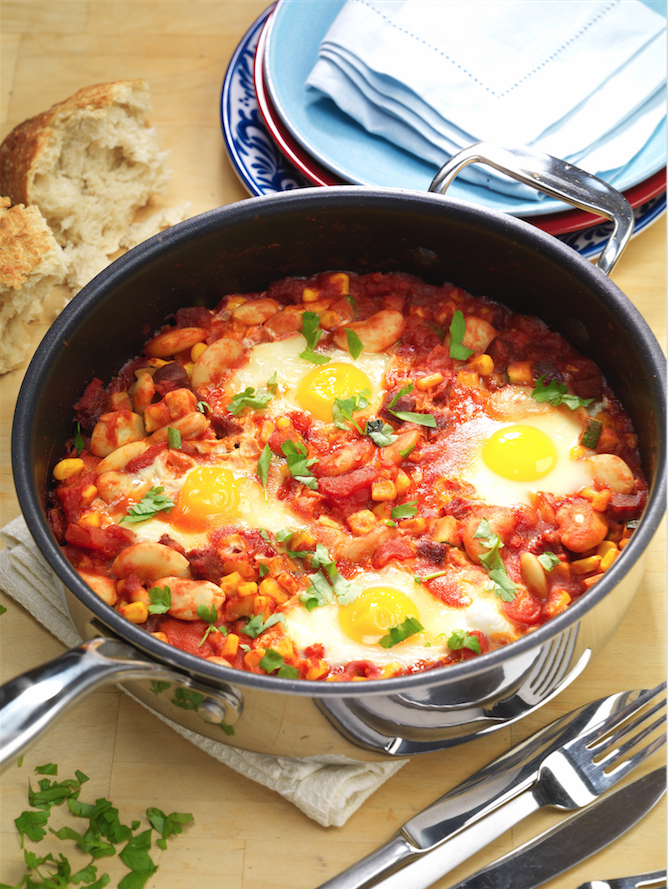 Sweetcorn really grew in popularity in the UK after World War II, despite having been cultivated in other parts of the world for thousands of years. Corn – or maize – was an important food source for Mexican and central American cultures as early as 3,400 BC, so our history with this popular grain and vegetable (it is both) is relatively new. Sweetcorn is now grown extensively across southern England and is one of the most versatile canned ingredients available.

Check out five of our favourite canned sweetcorn recipes below:

The most important meal of the day

Canned sweetcorn might not be the first ingredient you think of for breakfast, but we’ve tried and tested these Mini Sweetcorn Pancakes, and they’re a huge hit with all the family, for a weekend meal when you have a little more time to play with. Using a can of sweetcorn in a fluffy pancake mix, served with crispy streaky bacon, this dish can be turned sweet with maple syrup or savoury with tomato ketchup. A popular choice for the kids, this is also a great recipe for getting protein in before a busy day, delivering over 17g per portion.

Another brunch favourite is this sweetcorn recipe for Mediterranean Baked Eggs. Using just one pan, this is a delicious and easy way to get canned vegetables and protein into your diet – without much washing up! Featuring chorizo, courgette, paprika, garlic, canned chopped tomatoes, canned sweetcorn, canned butter beans and – of course – eggs, it’s a lively way to start the day with a range of complimentary flavours. Taking only 20 minutes to prepare, it can be tweaked in all sorts of ways, from adding a little extra chilli to avocado slices for a taste and texture contrast. This breakfast (or lunch or dinner) dish comes in at just over 250 calories per serving, and with the rainbow of ingredients, it’s one of the healthiest recipes in our collection.

Of course, meals with sweetcorn aren’t limited to breakfast, and one of our favourites, American Style Beans with Corn Dumplings, is perfect for this time of year as the nights draw in and we look to warming comfort food, that works well as leftovers too.

This American inspired dish has a variety of tastes and textures, and although it takes 45 minutes to prepare and cook, it can serve a crowd and keeps well to eat the next day. Using celery, smoked bacon, onion, canned baked beans, canned pinto beans, canned frankfurters, cherry tomatoes – and canned sweetcorn and cheese for the dumplings – this is a powerhouse of nutrition in one meal. The mixed canned beans provide longer lasting energy, helping you to feel fuller for longer, and the sweetcorn gives an unusual but delicious texture to the dumplings.

On the other end of the spectrum, canned sweetcorn is also a fantastic ingredient to use in salsas, which is one of the more popular additions for spring and summer menu planning. This recipe for Herb Crusted Tuna with Apricot Salsa is an easy but impressive dish when cooking for friends, and is a great way to put a modern spin on a tuna dish. Tuna steak is best with a light salad or salsa and this combination canned apricots, canned chopped tomatoes, canned sweetcorn, cucumber, red onion chilli, lime and mint delivers a fresh, fragrant, and sweet flavour to cut across the fish fillet. This is such a versatile salsa, we think it would also pair beautifully with salmon too – why not experiment, and see what you think?

And finally, we have to give a shoutout to sweetcorn’s starring role in this epic Turkey and Stuffing Pie – the ultimate leftover dish. This recipe is great for using up Christmas leftovers, and if you haven’t enough turkey to fill the pie dish try adding canned ham or additional vegetables – leeks and broccoli also work well. The canned sweetcorn works really well adding sweetness and texture to the meat and mushroom based sauce, combining to make a creamy comforting pie that the whole family can enjoy. With a huge 45g protein per serving, this will definitely keep you going for the rest of Boxing Day!

Sweetcorn is full of vitamins A, B3 (which supports metabolism, the nervous and digestive systems) and C. It also offers additional folic acid and fibre!